“Green Eyes,” “Amapola,” “Tangerine,” ‘I Understand,” “I’m Glad There Is You,” and “Maria Elena;” all great songs, and all hits of the fabulous Jimmy Dorsey Orchestra.

Jimmy’s musical training began when he was a young boy in Pennsylvania. Along with his brother Tommy, the talented young musicians joined Paul Whiteman’s Orchestra and at the same time they were recording many records under the billing “The Dorsey Brothers Orchestra”. Their band continued through the early thirties until a dispute over a tempo of a song separated the brothers for decades.

Jimmy found himself an instant leader of the band that became the birth of the Jimmy Dorsey OrchestraTM. His records sold well in the thirties, but as the forties got under way it was apparent that Jimmy and his band had jumped to the top of the charts. Jimmy had so many hits that he was known as the “Juke Box King”, which made him the biggest success story of the time. Over the years, Jimmy had many other hit selling records and a series of motion pictures followed, establishing him firmly on top.

During the early fifties Jimmy was still a successful name in the business. Even with all of his success, he joined forces with his brother Tommy in 1953 to become the greatest band of all time.

With the untimely death of Tommy in 1956, Jimmy once again was left to carry on, but only for a short time as his own health was failing rapidly. In 1957 he left us with his last and greatest hit “So Rare” which topped the nation’s popularity charts selling over a million records.

The Director, Featured Vocalist And Owner 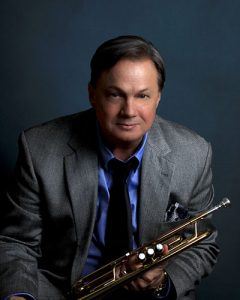 David comes to his position as leader of The Fabulous Jimmy Dorsey OrchestraTM from a lifetime in music. The son of professional musicians and a New Orleans native, David began his career at the age of 11 as a circus drummer working for his bandleader Dad. Then followed the path of his hero, Harry James as David became smitten with the trumpet a few years later. After honing his drum and trumpet chops in the demanding repertoire of the circus, David branched out in to Big Band, Jazz and show facets of the music business, eventually studying arranging, orchestration and conducting. Then in 1994, by a confluence of accident and necessity, he discovered the joys of singing. Soon after his colleagues were struck by the similarity of his vocal timbre and phrasing to that of the great Mel Torme and he became a protege of the renowned Broadway vocal coach, Fred Silver. Along the way David has played 1st trumpet, drums and/or sung for The Jimmy Dorsey Orchestra, Tommy Dorsey Orchestra, Harry James Orchestra, Les Brown Bands and others.

David considers it his great, good fortune to have trained “on the job” with his parents. His Dad, Bill, was a Jimmy Dorsey Orchestra side-man in the late 1940’s and his Mother, Lee, a wonderful musician trained in the instruments of trumpet and piano.

In David’s own words: In accepting the mantle of this storied and renowned musical institution, the Jimmy Dorsey OrchestraTM, I wish to acknowledge the sense of honor in which it brings me. My Dad, being one of Jimmy Dorsey’s trumpet players, always told me from the time I was old enough to understand, that Jimmy Dorsey was not only a virtuoso but the nicest man he had ever worked for. Being chosen to continue this amazing adventure is with a grateful heart and as leader of the Jimmy Dorsey OrchestraTM.  I’ll continue to create the perfect template for involving the audience in the presentation of the program, while maintaining Jimmy Dorsey’s high standards of musicianship. My job is to continue that ideal! 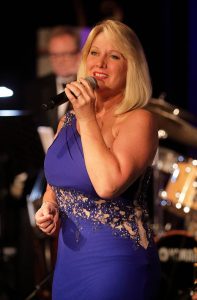 Continuing the legendary class and style, as the featured vocalist with The Fabulous Jimmy Dorsey OrchestraTM. Michele’s wonderfully varied career began at the age of 15 and has taken her to venues all over the United States including the White House, Disney World as a member of the well known acapella vocal group, “The Voices of Liberty.”

Michele’s soothing voice, uplifting flair and wide ranging vocal flights have had audiences and industry professionals taking notice of her dynamic talent. With prodigious accomplishments in the field of Opera (her first love as a young girl) to multiple leading roles in musical theatre, Michele has broadened her musical horizons since graduating from the prestigious Stetson School of Music.

Michele has also appeared as featured soloist with the Jimmy Dorsey OrchestraTM, Tommy Dorsey Orchestra, Harry James Orchestra, as well as a member of the Town Criers vocal group, alongside of Bill Tole and the Jimmy Dorsey OrchestraTM. She has also toured internationally with the most recent tour being New Zealand and Hawaii. In addition to her extensive experiences as a Big Band singer, Michele has also achieved acclaim for her productions of “To Rose, With Love” a journey through the wonderful musical world of the great, Rosemary Clooney and “Yesterday Once More” an homage to beloved pop star, Karen Carpenter.

Michele has stated, “To have the opportunity to follow some of the great vocalist’s for the Fabulous Jimmy Dorsey OrchestraTM is really a dream come true. I remember my Mom loving, ‘Green Eyes’ sung by, Helen O’Connell who was known as the quintessential Big Band singer of the day. I’m thrilled to know that little girls dreams do come true, as I am now stepping on the stage in the same role as the Jimmy Dorsey Orchestra’s original songbird, singing her first big hit, ‘Amapola’, continuing with the Internationally known, ‘Tangerine’ – and so many other great standards!”

“This opportunity emphasizes my great love of the music and the legendary performers of the ‘Great American Song Book from the Swing Era’. I sincerely look forward to meeting and performing for all the friends and fans of the Fabulous Jimmy Dorsey OrchestraTM both here and abroad. 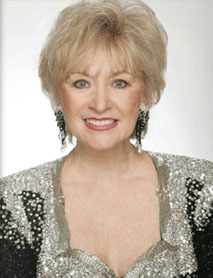 NANCY IS THE PROUD OWNER OF THE LEGENDARY TRADEMARK/S:
THE JIMMY DORSEY ORCHESTRATM    & THE PIED PIPERSTM

A native of Pittsburgh, Pennsylvania, Nancy was fortunate, in that, as a child she was exposed to some of the finest music in the country. She’s from a family of musicians who have performed with all of the “Big Bands” and musical greats. Greats that made American history with their music.

At the young age of 12, Nancy was with the world-renowned Pittsburgh Youth Orchestra. As a classically trained violinist, she attended West Virginia University School of Music and continued in education and performance at St. Louis University.

Nancy performed with the St. Louis Philharmonic Orchestra and many other chamber groups over the years. She has been featured on studio work as an instrumentalist. She has also been featured as a vocalist on recordings and commercials. She has also performed voice-overs and worked in the fashion industry. Nancy, was a model as well.

In addition to her varied achievements, Nancy has had a noted singing career performing throughout the country with artists and luminaries of the American Music Industry. Her talents have complimented the Jimmy Dorsey OrchestraTM for three (3) decades as their featured vocalist. She has performed occasional engagements with Tex Beneke , Nelson Riddle, The Tommy Dorsey Orchestra, The Glenn Miller Orchestra, The Clambake Seven, and many others.

Nancy has performed and shared the stage with Frank Sinatra, Toni Tennile, Jack Jones, Shirley Jones, Hal Linden, Doc Severinsen, Bobby Rydell, The Four Aces, The Lettermen and the Manhattan Transfer, just to name a few.  Nancy was also featured on a PBS Television Special with The Pied PipersTM entitled, “Those Fabulous Forties”.

Nancy’s incredible talent as a soloist and her love of close harmony as a group singer is evident in the success of the American Vocal Legends, “The Pied PipersTM” where she has been the lead singer since 1983. The Pied PipersTM have continued to be the premier Vocal Group in the country today and inducted into the “Vocal Group Hall of Fame” in 2001

Sinatra Through
The Early Years

Sinatra Through The Early Years